The first construction project of the Third World Fund was a trip to the Dominican Republic in November (8th – 23rd)  2002. Since we had no experience with “construction” projects, this trip was organized for us by World Servants, a Christian organization organizing this kind of trips for young people. For them is was the first project with a group of adults instead of adolescents.

On Friday, November 8th, we left with 29 Atos Origin colleagues and supporters and 2 companions of World Servants to the DR. After a 9 hour flight we landed in the capital Santo Domingo. In an old American – yellow – school bus, the journey continued over land. During the trip we were directly confronted with the great differences between wealth and poverty of this country. The first place to stay was a community health center at the borders of a large residential area (slum).

After this first night almost without sleeping because of heavily barking dogs, we went to the city of San Juan de la Maguana – about 50 miles from the border of Haiti. The purpose was to expand a high school with 3 classrooms. We were housed in a guesthouse of Clinica Cristiana Salud Integral Para. A guesthouse which is affiliated with a medical center, sponsored by U.S.- and Canadian churches. The facilities in the guesthouse were fine, however, subject to Christian values and rules of the organization (e.g. no alcohol and no smoking). Not always easy for some of our participants without religion feelings. The Sunday was spent at a lake where we could enjoy swimming and getting used to the sizzling heat.

Our activities: carrying stones, masonry walls and transporting sand . All led by a local contractor. A lot of steel and concrete was incorporated into the walls to withstand the frequent hurricanes in this area. We did hard work in the sweltering sun. Drinking plenty of water and relaxing time by time was the best way to continue. Besides the construction project, two other activities have been developed. Daily there was a sport – and game session in the morning , organized by some of the participants for the children from the neighborhood. A good idea to get closer to the locals and every day a lot of children were present. Especially when we handed out pens and other gadgets…

A second activity was visiting people in the slum, assisted by an interpreter; an enriching experience of our trip. During this visits you realize the different way of looking into the future. We are used to plan ahead for 30/40 years, when we talk about our retirement. The DR people look forward to the next day trying to have something to eat for their children. There was also a lot of discussion in our group seeing children who don’t go to school because they have no birth certificate – lost in a tropical storm, no money for registration or illegitimate kids. Unbelievable to us!

Sunday – the Saturday we continued working – we again went to the lake. Some of the group did a hike around the lake, however it was not as easy as they thought. After about 6 hours they returned, very tired but with great stories. They drunk water out of a local river quenching their thirst and luckily it did not led to significant discomfort.

Monday back to work. Only 3 days of working were left and then the return journey would begin. The walls became higher and higher so scaffoldings were used to do the higher work. In the evening we were invited by the school community for a wonderful dinner with dancing and music. Music and dance is a very important part of local life and entertainment.

After painting the Atos Origin and World Servants logo’s on the enclosing wall, we had to depart. The last activity was a nice swim in the Caribbean sea and shopping in Santa Domingo, before we went to the airport. Unfortunately, in another bus, as our yellow bus broke down. We enjoyed two weeks of sun, building, fun, sweat, water (drinking, river and rain), friendly people, smiling kids, culture and a new life experience. 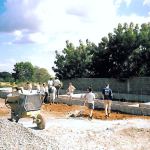 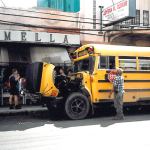 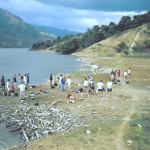 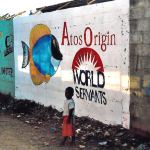 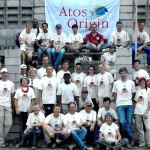